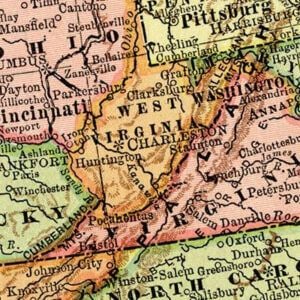 West Virginia became a U.S. state in the middle of the Civil War in 1863, and in 1885, the capital of Charleston was established.

Contact us if you’re looking for a specific West Virginia map and don’t see it on this page. We’d be happy to check our archives for you. While we have an extensive collection of old maps, there remain many more we still need to restore so we can add them to our archives. Chances are, we’ll have what you’re looking for.

West Virginia is a state rich in natural resources, most notably coal, mined there since the early 1800s. The state’s coal industry began to grow exponentially in 1883 when major rail lines were completed. That same year, the industry’s first mine safety laws were passed. Despite the safety laws, there were several disasters in the early 1900s that claimed hundreds of lives.

In 1900, a worker at West Virginia’s Red Ash Mine accidentally left a trap door open, leading to a methane build. A severe explosion (believed to be caused when coal lights ignited the methane and powder kegs) killed 46 miners. Significantly more casualties would come later in 1907 when an explosion at a mine in the town of Monongah claimed 361 miners. The death toll made it the worst mining accident in U.S. history.

Today, working in a coal mine remains a dangerous profession, and there are strict federal safety regulations to help safeguard workers. West Virginia remains a top coal producer, even though the industry is waning as the use of natural gas increases.

Tourism is also a significant economic driver. West Virginia is the only state within the Appalachian Mountain Range, making it a great place to visit. For outdoor enthusiasts, it’s the ultimate playground where you can hike, fish, go white water rafting, hit a mountain biking trail, ski the slopes in the wintertime, rock climb, go caving, or explore off-road trails on an ATV. And that’s just for starters.

For ultra thrill-seekers, there’s the annual Bridge Day celebration in Fayetteville. One day a year, BASE and bungee jumpers are allowed to jump off the third-highest bridge in the U.S., the New River Gorge Bridge. Thousands of people attend every year to watch daredevils leap off the 876-foot tall bridge. For comparison, Niagara Falls is 167 feet high, the Statue of Liberty is 305 feet tall, and the top of the Eiffel Tower is 984 feet.

The rest of the year, there are guided tours across the bridge’s catwalk. Visitors are fastened to safety cables and then guided across the 3,030-foot length of the bridge.

All items in the store today are 30% off through 11:59 pm CST tonight! No coupon code necessary, discount is automatically applied to all items!