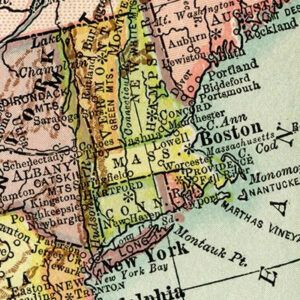 The New England state of New Hampshire took statehood in 1788 (it was the 9th state admitted to Union—one of the original 13 states).

If you’re looking for a map for a specific New Hampshire state and don’t see it on this page, contact us, and we will check our archives. While we have an extensive collection of old maps, there remain many more we still need to restore and chances are, we’ll have what you’re looking for.

Europeans first arrived in what is now known as New Hampshire in the early 17th century. The first settlement was a fishing outpost established in 1623, three years after the Pilgrims on the Mayflower arrived at Plymouth Rock. Before that time, the region was inhabited by Native Americans, specifically the Abenaki and the Western Pennacook tribes.

Colonists would continue to arrive over the next several decades. Eventually, the Native American tribes were pushed out of the area by the time New Hampshire became a state in 1788. Concord was made the state’s capital in 1808.

During the Civil War, around 35,000 New Hampshire men joined the Union military. At the time, that was about 11% of the state’s population. There were no Civil War battles fought in New Hampshire.

Turning to industrialization, textile mills reigned supreme in New Hampshire in the 1800s and early 1900s. The largest textile mill, Amoskeag Manufacturing Company, was founded in Manchester, New Hampshire, and at one time employed half of the city’s residents. The mill boasted 25,000 looms that could produce more than 50 miles of cloth each hour, making it the largest cotton textile plant in the world. Amoskeag Manufacturing, which first opened in 1810, ceased operations in 1935.

New Hampshire’s textile mill days are a thing of the past, and today the state’s economy is much more diversified. They include a mix of agriculture, manufacturing, health care, real estate, retail, wholesale, government, tourism, and finance.

Finally, New Hampshire’s Mount Washington, at 6,288 feet, is known for its extreme weather conditions. It’s said to have the worst weather on earth, rivaling places like Antarctica and Mount Everest.

The ‘Venturi effect’ is what causes the extreme weather conditions on Mount Washington. Its peak is much higher than the surroundings. It results in all of the weather being pushed up and over the summit. Additionally, as air goes over the summit, it gets squeezed between a stable layer of air and the mountain, causing winds to accelerate.

Due to this effect, Mount Washington holds the highest wind speed record of 231 miles per hour, recorded in 1934. In January of 2004, the wind chill dropped to -102.59 on the mountain.

All items in the store today are 30% off through 11:59 pm CST tonight! No coupon code necessary, discount is automatically applied to all items!