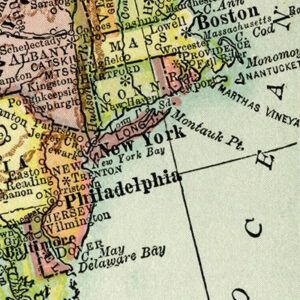 The New England state of Rhode Island, the smallest state in the U.S., took statehood in 1790.

Our historic map archives include many vintage maps of the entire state of Rhode Island (dating back to 1797) and the cities of Bristol, Lonsdale, Newport, Pawtucket, Providence (the state’s capital), Westerly, and Wickford.

If you’re looking for a specific Rhode Island map and don’t see it on this page, contact us, and we’ll check our archives. While we have an extensive collection of vintage maps, there remain many more we still need to restore, and chances are, we’ll have what you’re looking for.

Rhode Island has a rich colonial history that began in 1636 when a Puritan minister named Roger Williams settled in the area. He went there because his religious views were not welcome by the Massachusetts Bay Colony, which banished him. Williams called his new settlement Providence and welcomed all who were seeking religious freedom.

In the coming decades, many other settlements would be established, and by the late 1600s, Rhode Island became heavily involved in the slave trade, despite an act in 1652 that abolished it.

In the Revolutionary period (in 1776), Rhode Island renounced its allegiance to the British Crown (the first of the 13 colonies to do so). Conversely, Rhode Island was last to ratify the United States Constitution. It took the threat of heavy trade tariffs to get the state to sign.

After Rhode Island became a state in 1790, factories sprouted up throughout Rhode Island during the Industrial Revolution, and workers moved into its cities. Later, during the Civil War, Rhode Island’s industries supported the Union Army. Over 25,000 men from the state also fought in the war.

Once the Civil War ended, Rhode Island began to prosper as textile mills and manufacturing went full steam ahead. Fast forward to today, and Rhode Island’s economy is much more diverse. The top industries include its heritage manufacturing, but also agriculture, health services, and tourism.

Rhode Island’s New England charm is what draws people to visit. Like Maine, Rhode Island’s coastline is famous for its quaint villages, fresh seafood, public art, and unique shops. One of Rhode Island’s most popular beachside communities is Newport and its rocky coast. Many Victorian age industrialists who settled in the area built summer homes in Newport that remain today. Plus, Newport has a legacy of sailing and tennis.

Rhode Island’s capital of Providence is located inland, about a 45-minute drive from Newport, at the head of Narragansett Bay on the Providence River. It’s known for its mix of small-town charm and big city sophistication. Providence is also home to Brown University, an Ivy League college known for its science programs. Some famous names from Providence include fantasy and horror fiction writer H.P. Lovecraft, Tom Adams (cover illustrator for the wildly popular Agatha Christie paperbacks), Pauly D (from MTV’s Jersey Shore), and television personality Meredith Vieira.

My cart
Your cart is empty.